We are on our way through Friesland and I spot a church tower. It reminds me of all the times I have heard my father tell me that no matter where you place yourself in the Frisian landscape, you can see a church tower. Of course, the clever thing about the postulate is that you are always reminded of it, when you actually spot a church tower. It always sparks an inner defiance in me, and I wish I could find a towerless place, but I have yet to succeed. The landscape is as flat as a pancake, and only the churches that form the centers of picturesque small villages dotted along the green plains stand out.

I am on a road trip with my sister Rikke, my niece Robyn and my two daughters. We are squeezed together in our Peugeot 206 SW, especially poor Robyn stuck between baby Nor and Kaia in the backseat.

We have visited the Netherlands since we were children, but in my case mostly with my parents. Now the time seems ripe to experience Friesland by ourselves, and we are curious. We have asked our uncle Simon, who has kindly agreed to take us in, to warn some of the locals that the sisters want to talk to them.

After a few days with different Frisian highlights, one early morning we visit the local farmer, Tjalling Rodenhuis, who has converted some of his land as part of a publically funded program to ensure the population of waders such as the northern lapwing, the black-tailed godwit and the dunlin. He has offered to show us his fields, so we can witness the difference between the converted land and the conventional fields ourselves.

Before the tour starts, we make a brief stop in the cowshed, and when Tjalling comes to pick us up, he is greeted by a mooing so penetrating that I have to smile. There is no doubt they know who he is. We walk across the fields, and while Tjalling points out the birds and their nests advising us at the same time to tread carefully, we hear the cows in the shed. Their mooing is growing ever more persistent, and when I ask why they are so loud, he tells me that they are waiting to be let out. That is, they are calling for him.

When we come back from our tour of the fields, he opens the gates and lets the cows out. The magnificent cows wander off one by one into the wet and misty Frisian landscape, eager but calm. The last cow to come out of the shed does not look in quite the same shape as the others. She is a bit tired looking, and she stays still for a long time gazing out over the fields, before finally, very slowly with a dignity reserved for the elderly, she joins the others. Tjalling tells us that the cow is fifteen years old, and that dairy cows usually do not last 10 years. However, this cow has yielded 100.000 l of milk and born a calf every time she was inseminated. Besides, says Tjalling, she is a sweet cow. 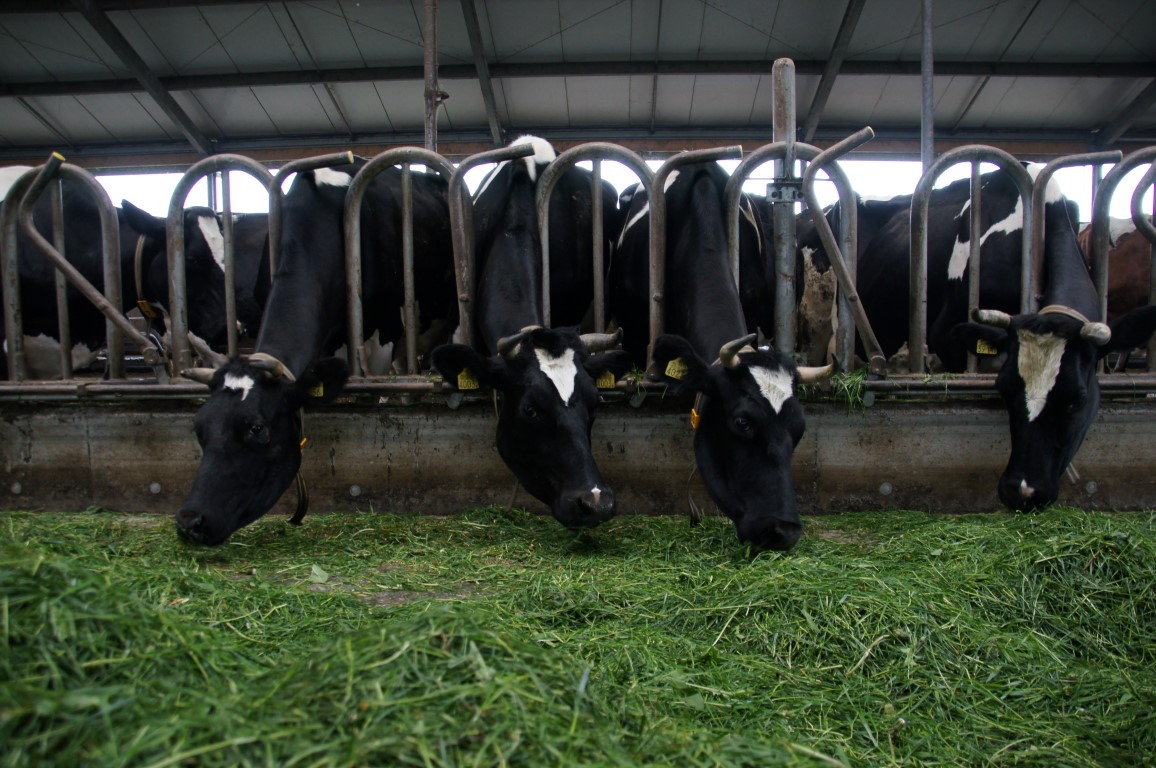 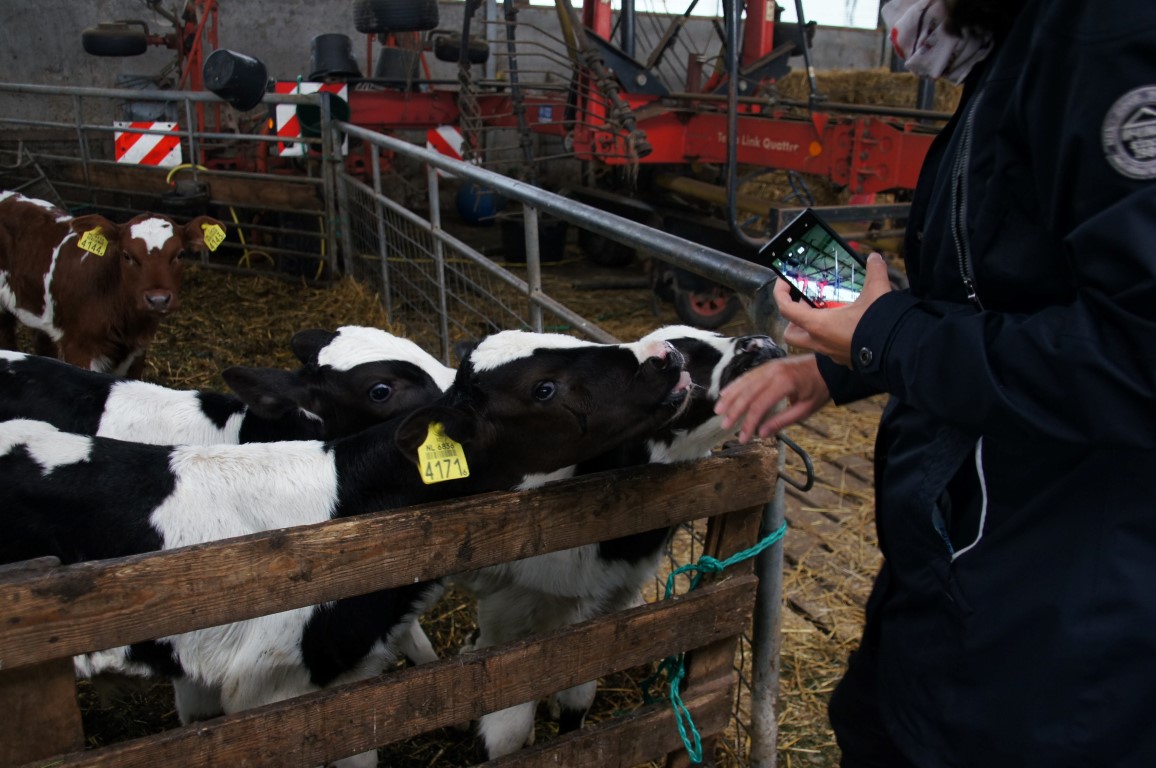 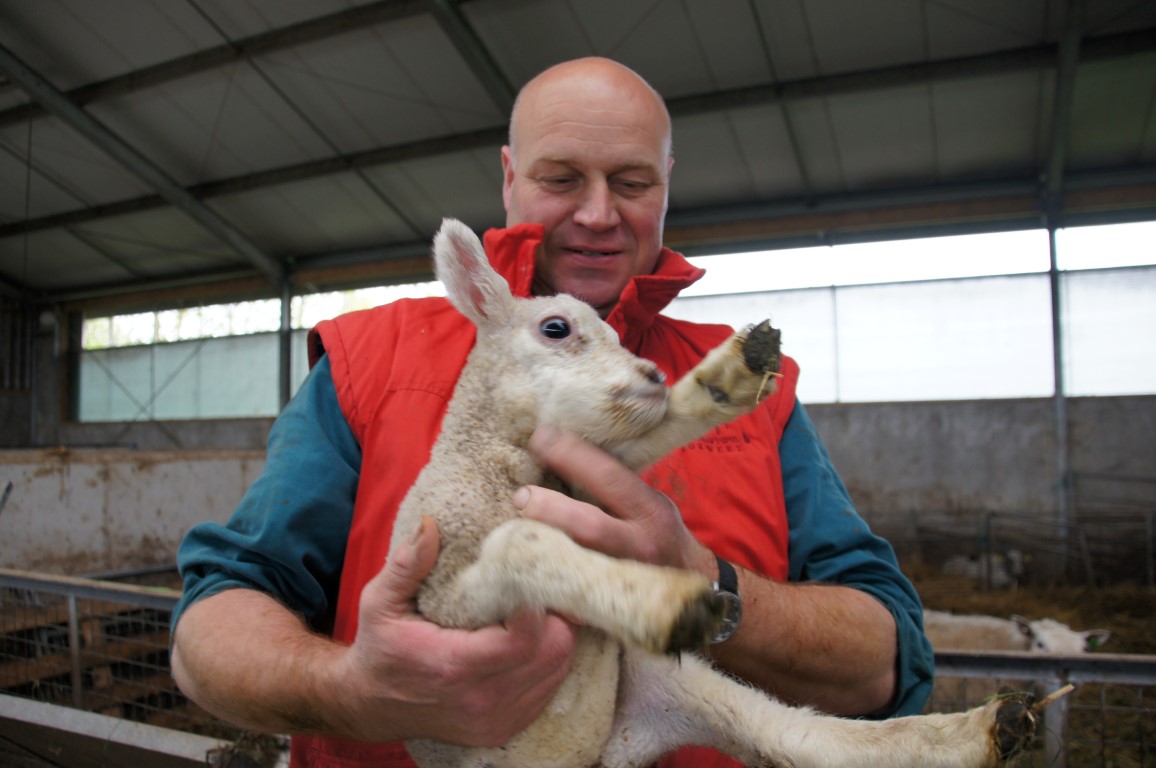 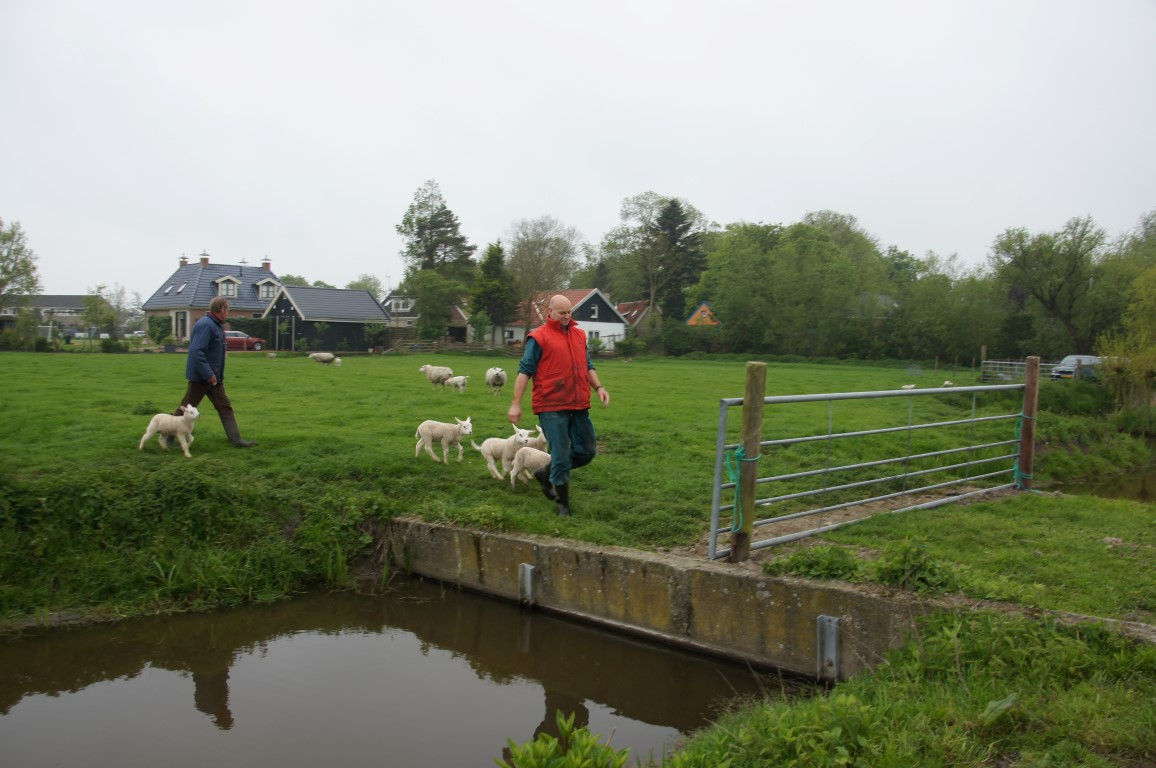 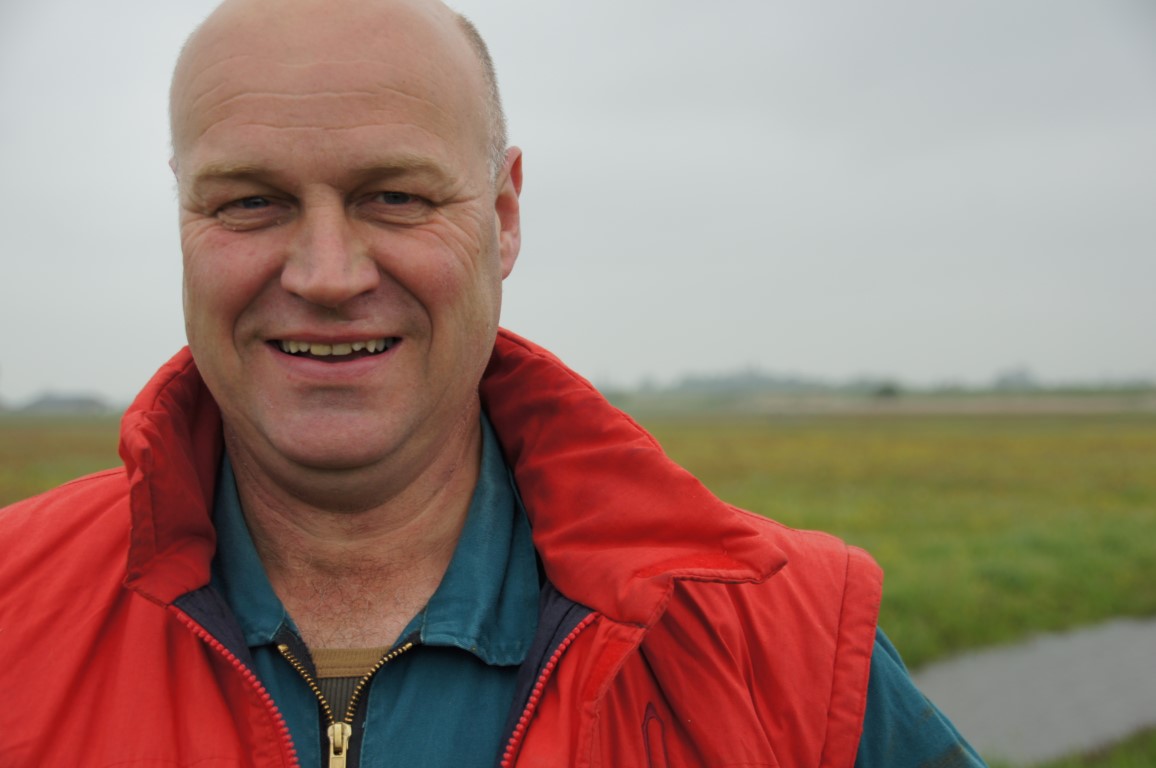 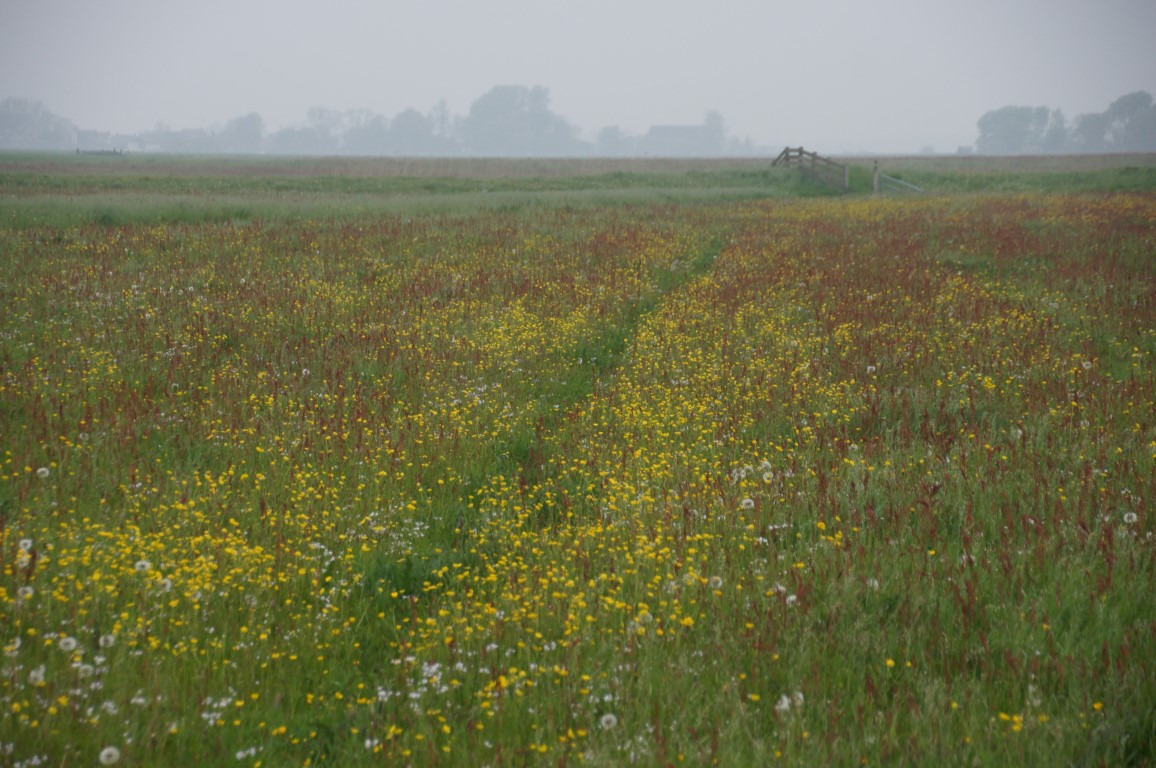 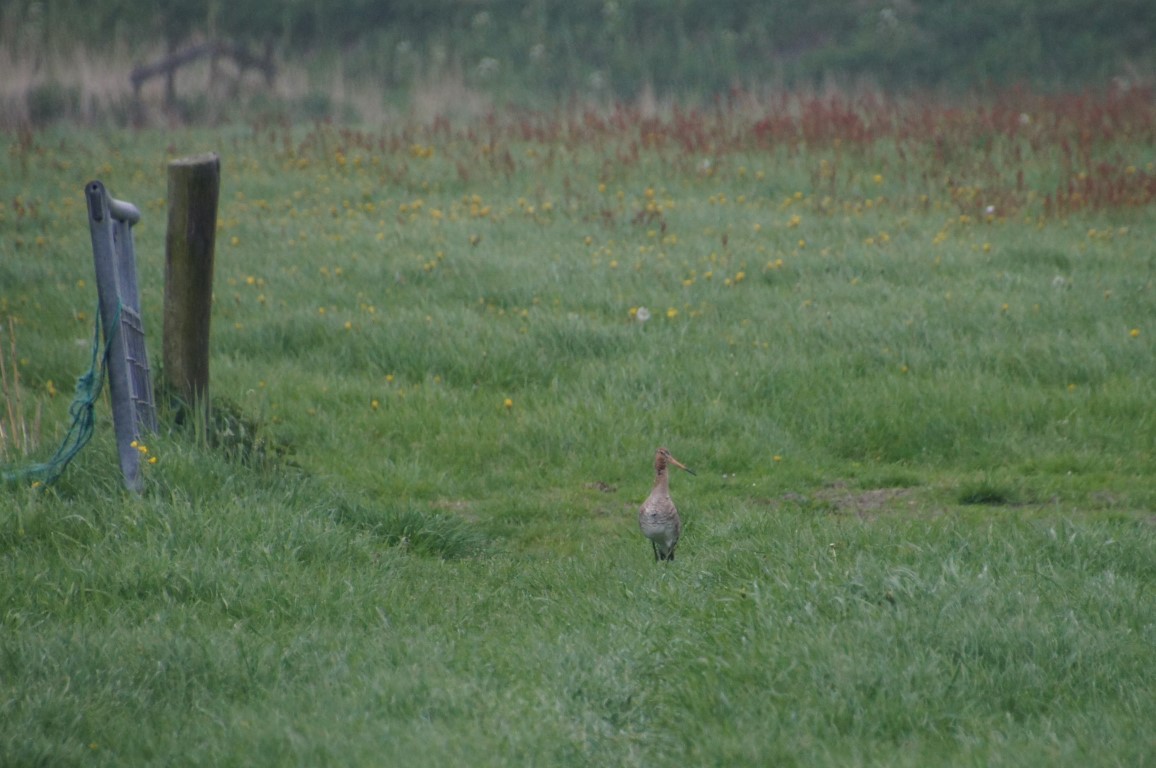 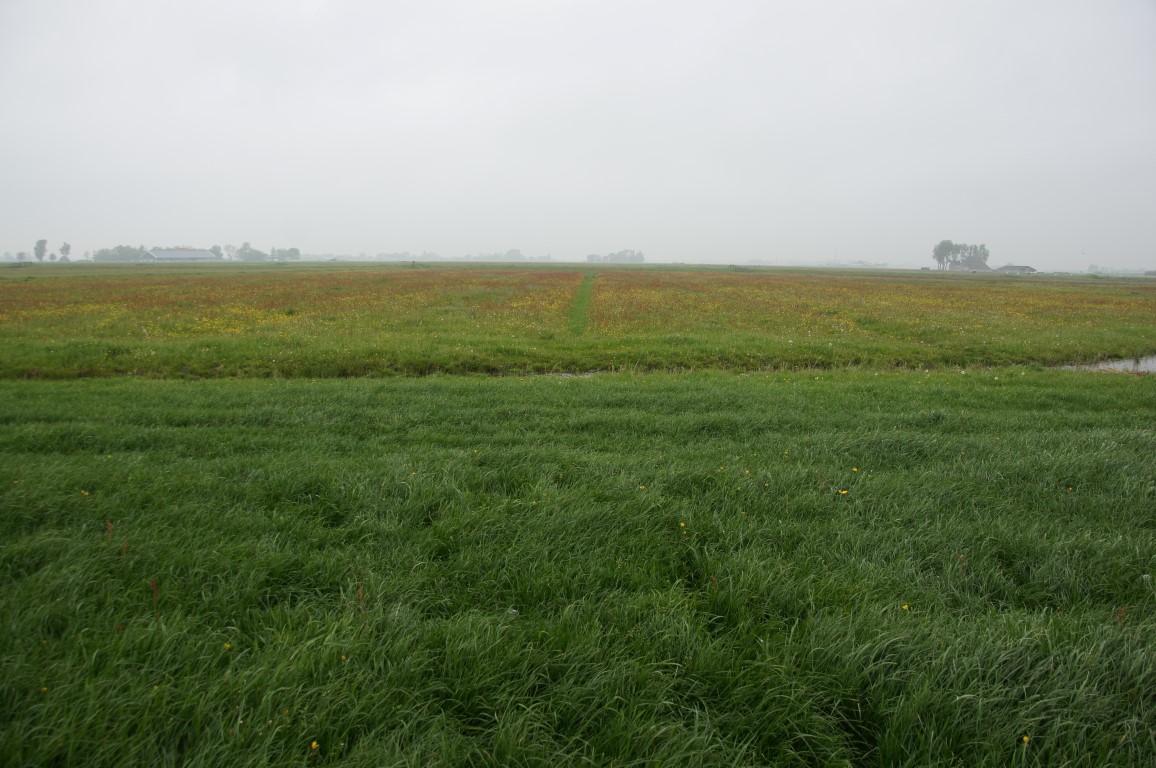 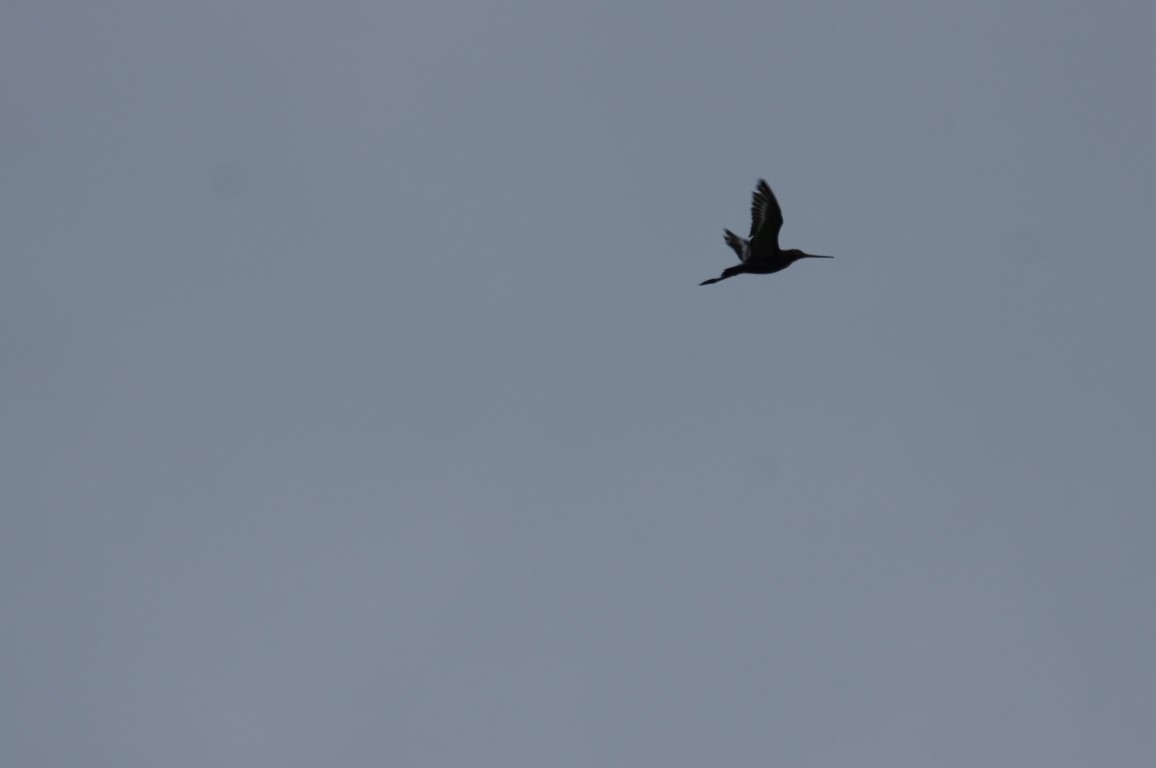 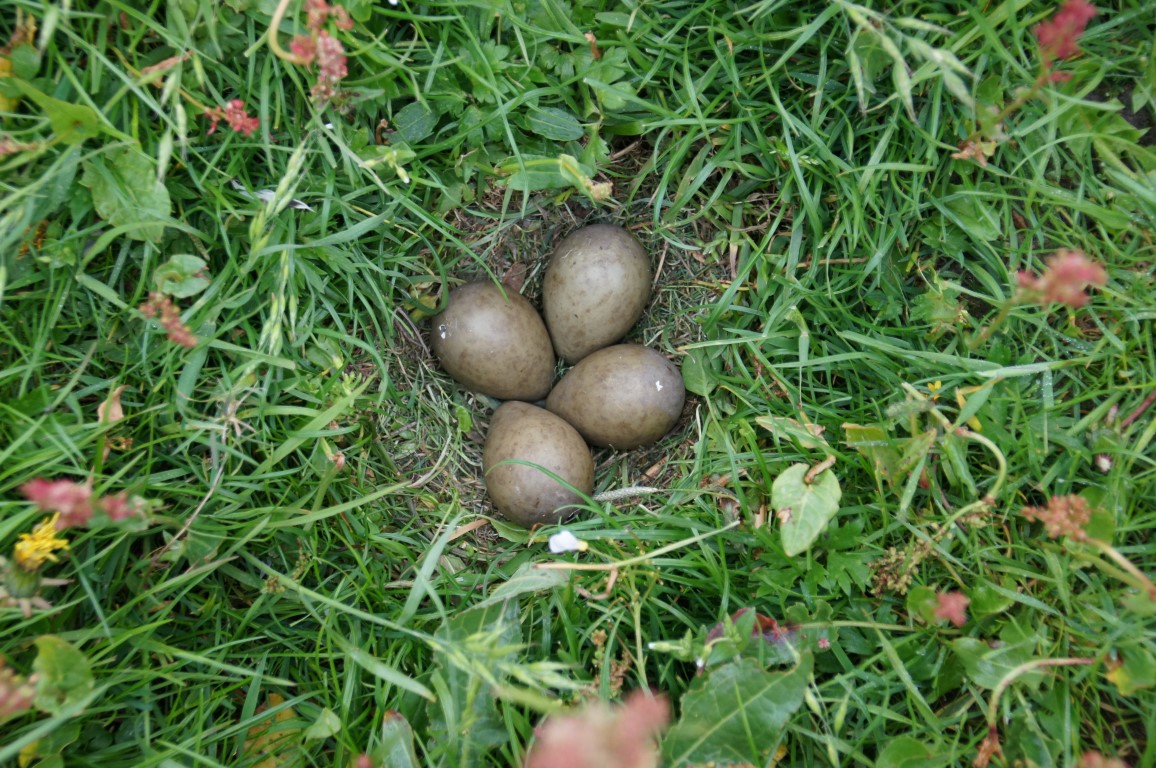 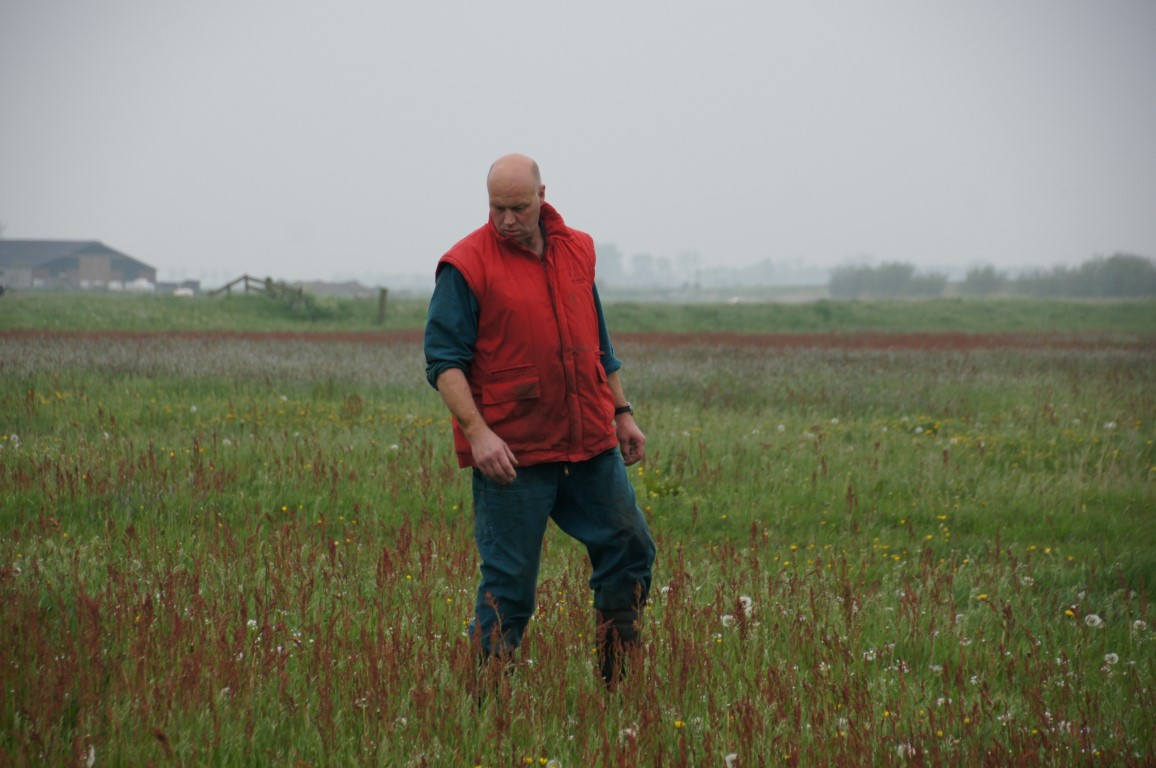 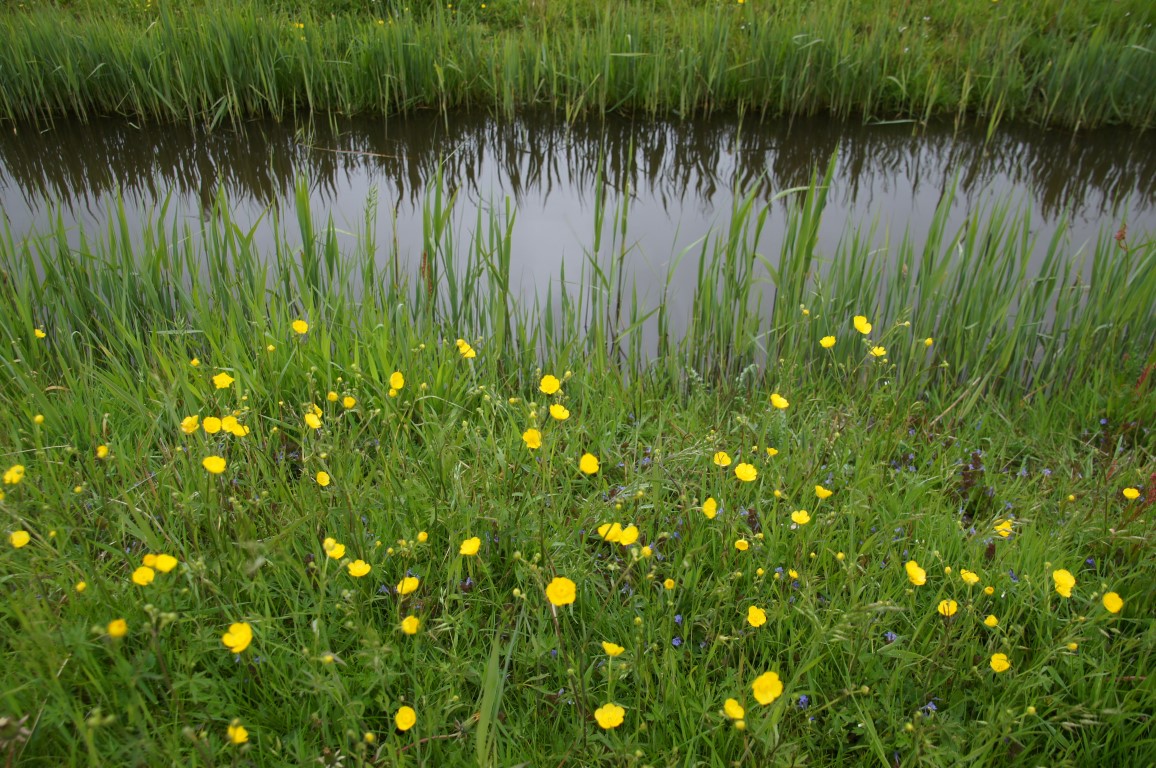 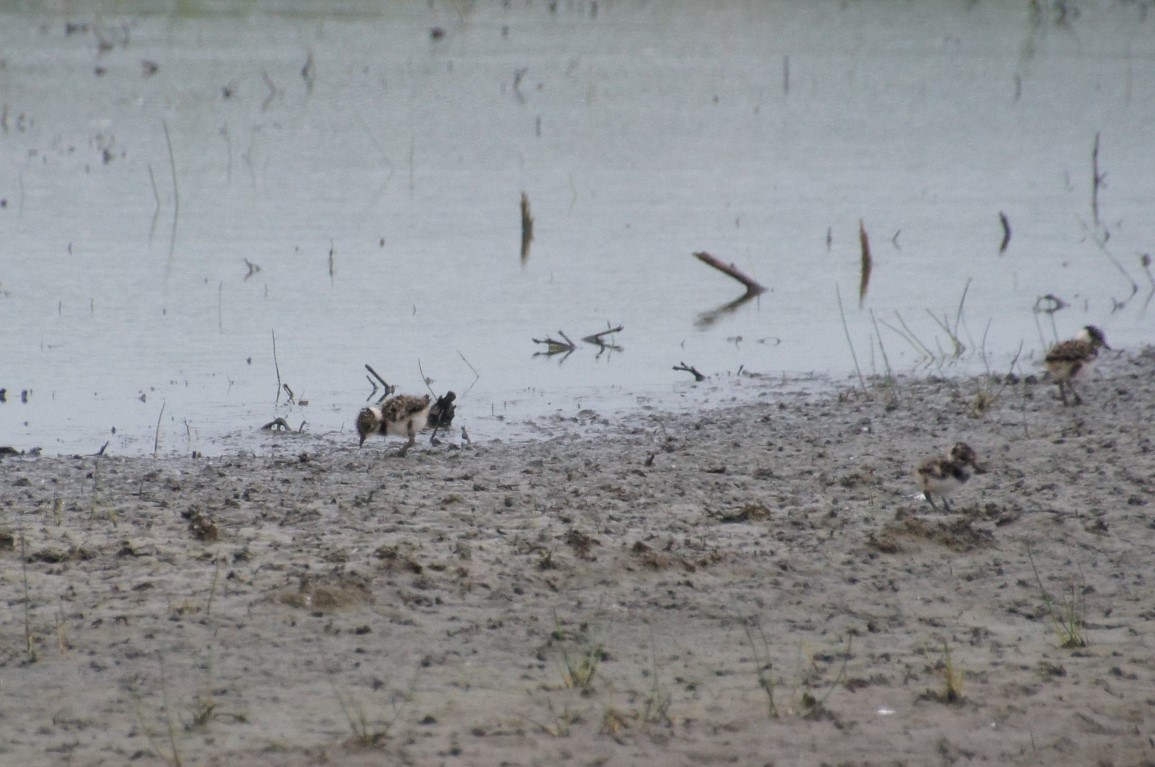 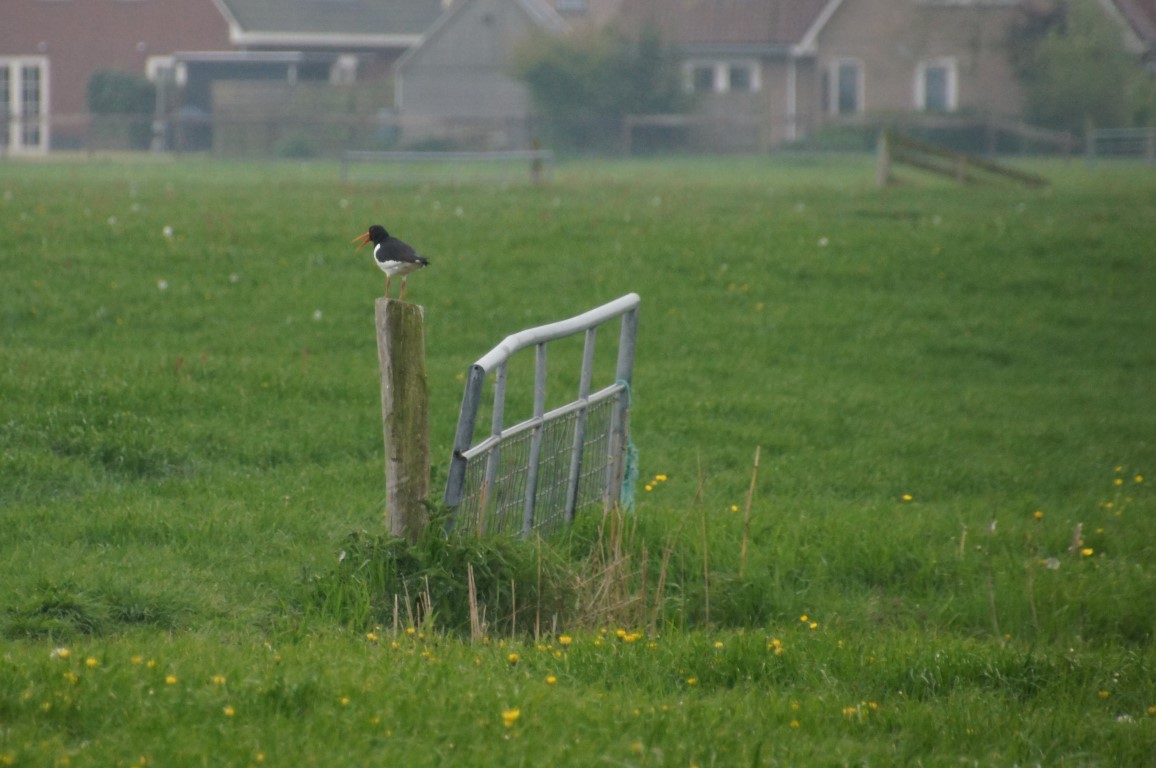 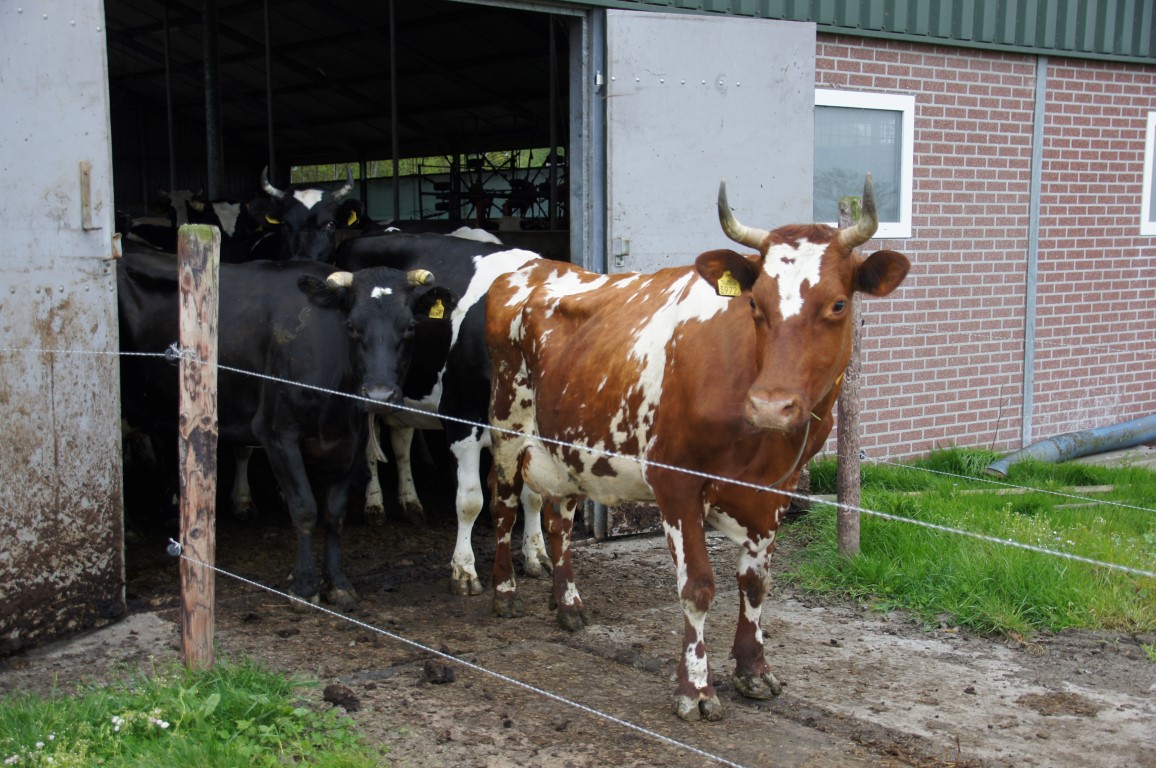 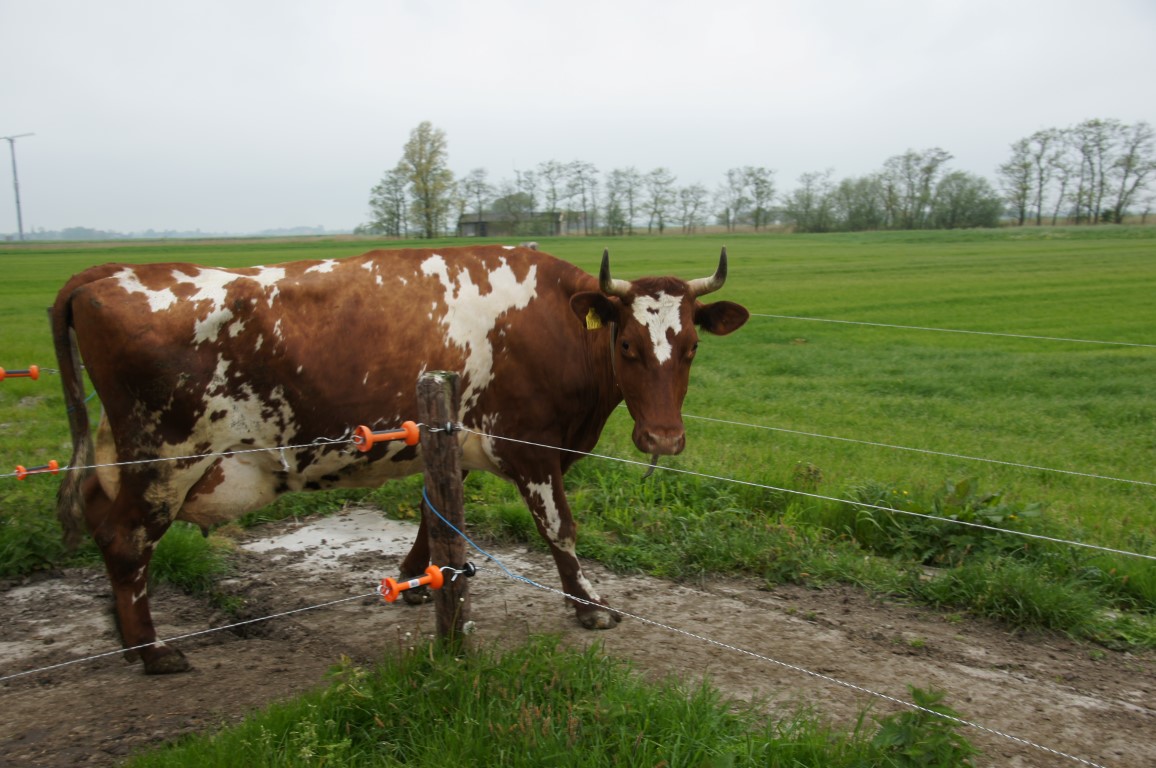 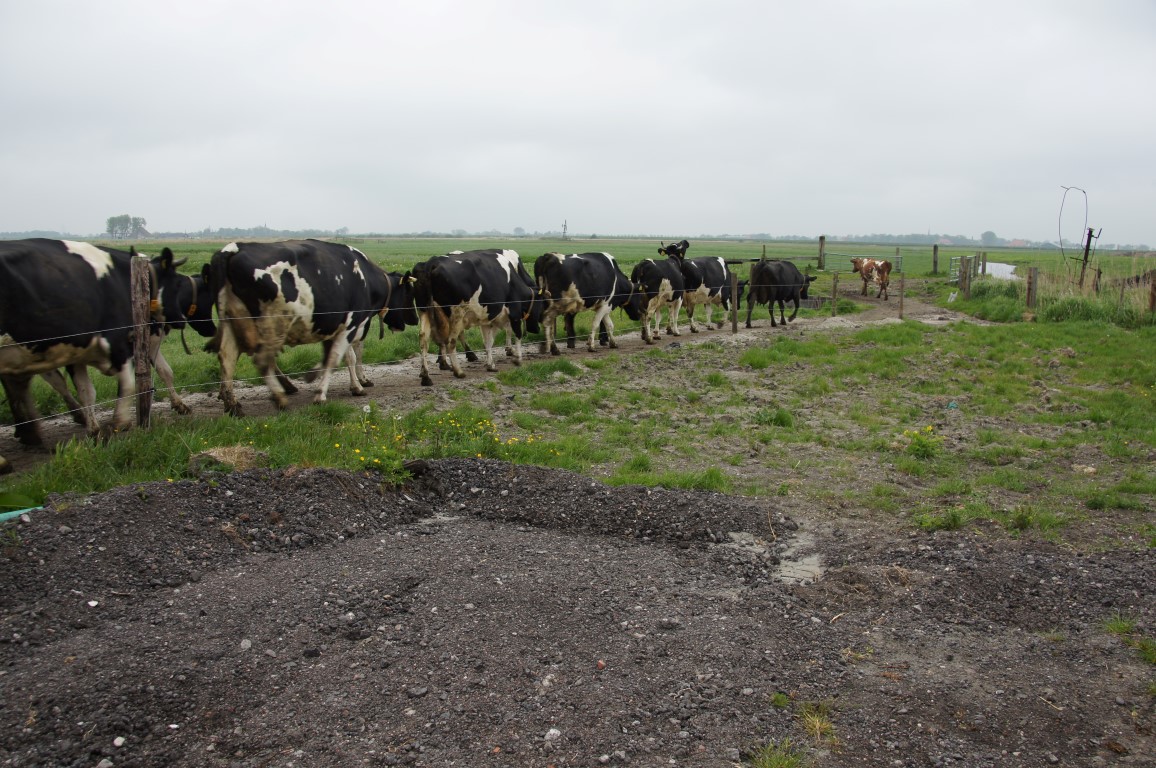 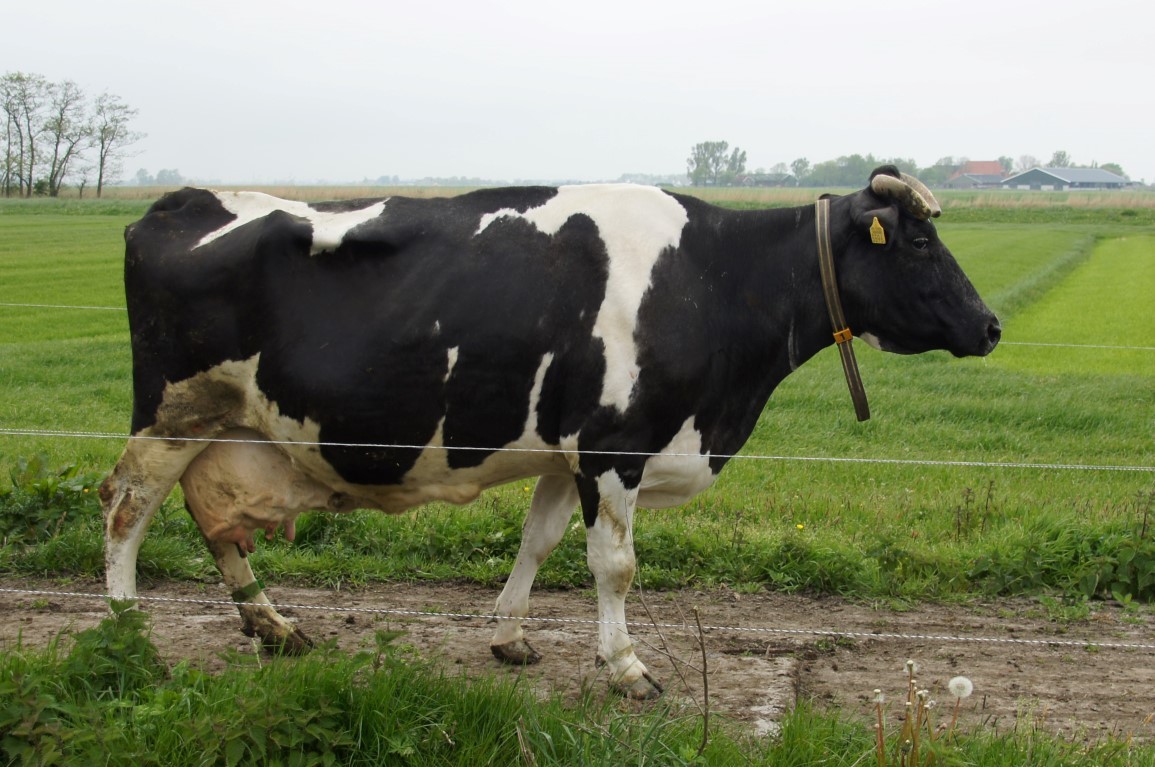 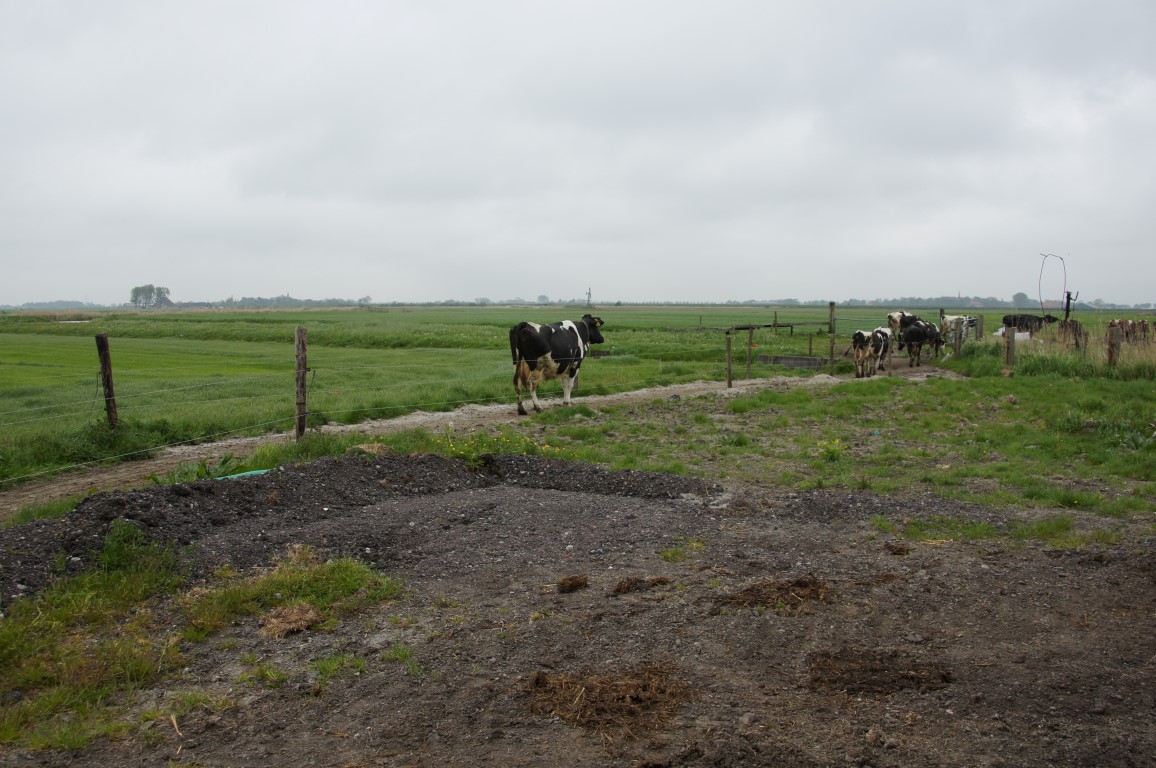 This series of photographs were taken by Rikke, when we visited Tjalling Rodenhuis and his sweet cow(s).

Tjallings farm is not organic. The organic feed is too expensive, and his land is not large enough to feed his cows exclusively with grass from his own fields. However, at Tjallings farm the cows are let out as soon as the weather is stable and warm enough, and they stay out for as long as the temperature lasts.

Besides, the farmers who own the dairy that weighs Tjallings milk have decided that the conventional farmers, who put their dairy cows on pasture, get a higher price for milk than if the cows spend all year inside. The milk, however, is not sold separately but mixed with milk from permanently stabled cows. This arrangement has come to effect, simply because the farmers believe that there is an inherent value in letting the cows graze, that the cows belong in the Frisian landscape, or in fact, is a part of the Frisian landscape.

In Denmark, things are headed in a different direction. According to SEGES, the research center for the industrial organization Danish Agriculture and Food Council, approx. 75 % of conventional dairy cows were grazed in 2003. In 2013, however, the number dropped to approx. 25 %. The reason is that the Danish cattle breeders have gone from small farms with varied animal husbandry to large specialized farms. In short, it is manageable to put 40 dairy cows on pasture, but not 160. In addition, Danish farmers do not believe that the economic incentive to put the cows on pasture is strong enough.

According to the lobbyists, this is not necessarily a step back, though. It turns out, that when a cow has the opportunity to choose between a shed with concentrated feed and a field of grass, they will most likely choose the shed. I think I shall attempt a similar experiment with my eldest daughter. I will put a bowl of candy and a bowl of vegetables in front of her and ask her to choose. 10 out of 10 times she will choose the candy, so that must be best for her.

It is a disturbing tendency if you ask me. And do people even know? That if you drink a glass of conventional milk from Danish dairy farmers, there is a high probability that the cow has never set cloven-foot on grass? If you ask the think tank, there is no direct proof that the grazing of dairy cows equals better animal welfare. On the contrary, they stress that the cows risk damage and infection to the hoofs on their way from shed to field (!). According to SEGES, the definition of a loser cow is a cow that has a hard time getting by in the competition with other cows. Surely, the real loser cows are those unlucky enough to be kept in a shed all year round without the possibility of grazing.

On a sunny evening walk outside the village, we come by a field with large calves. When we stop, they gather around us, hesitant and curious. We pat them, and feed them with grass, which they do not care to eat, since they have plenty, and it hits me again that you have to be able to look your cow in the eye. See it and know it has had a good life. Is that too much to ask? To be able to look into those big, chocolate brown eyes and say. “hey cow, you look delicious”, or ”I would not mind paying a few extra kroner to drink your milk”. Every time I am in a supermarket, I think of Tjalling and his sweet cow. On how impossible it is as a consumer to distinguish between loser cows and sweet cows. And how absurd it is that the increased focus on animal welfare and ecology has had the effect on conventional farming that the animals are not send to pasture. I am sure that there are farmers like Tjalling among the 25 % of the Danish farmers who still put their dairy cows on pasture. But the odds are not good enough, and the carton does not say whether the cows have grazed or not. The alternative, of course, is buying free range or organic products. As such, it is not so much an alternative as the only meaningful way forward.

On our way home in the old Peugeot, well stocked with mandatory Dutch delights, I gaze out the window at the Frisian landscape. I am not looking for church towers, but animals. There are sheep, horses and cows everywhere – and not a loser cow in sight. P.S. When you buy organic milk or beef in Denmark, you are according to SEGES guaranteed:

In the Netherlands the number of cattle farmers who send their cows to pasture also decreases, but not to the same extent as in Denmark. 70 % of the dairy cows from conventional farms are still grazed.

More information on SEGES, and their views of dairy cows and grazing (Not translated to English, unfortunately)